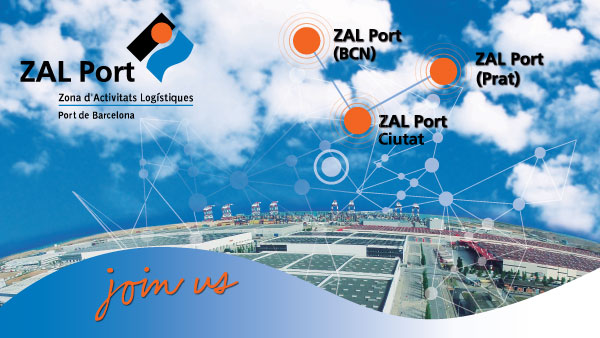 The ZAL Port, previously ZAL, is working on its new image. A series of modifications that go far beyond the change of name or of nuances in the colours of its graphic logo, it will include the modernisation and brightening up of the warehouses, the entrances, the fences and all the signs in the park in a key moment in its history. Strolling through ZAL Port will be a very different experience in the coming months.

The transformation is closely linked to a key moment in the history of the ZAL Port, the acquisition of the BZ1 and BZ2, the last available land that remained adjacent to the Port. These 27 hectares represent a new area for the park which was necessary to differentiate from the rest and give it its own name.

A new name for the ZAL Port park and a name for each area: ZAL Port (BCN) the first one, and the original area. ZAL Port (Prat) for the zone that marked the entry of Abertis as a CILSA shareholder. ZAL Port-Ciutat for the BZ in which MERLIN Properties entry as a shareholder has been key in this process

Renovation of the land and online

The ZAL Port is experiencing a period of change. The media have announced its expansion not only regarding land acquisition, but also for the investment of 30 million Euros in warehouse construction. This includes that of Carrefour which, when it starts its operation at the beginning of 2017, will have a distinctive blue strip that will identify all the warehouses of the ZAL Port.

One of the main objectives of this project is to make the park and its services a pleasant place which is easy to locate and get information about. For this reason it has even made an effort in the design of the finer details of the street furniture. Directories which locate more than 130 businesses in the park, totems and customised elements are some of the most prominent examples.

Similarly, the online presence of the ZAL Port has been updated. A free App with both iPhone and Android versions allows geo-localisation of absolutely all of the companies in the park. A complete directory that also allows you to establish calls and which can be downloaded directly through the corresponding Mobile Store or from the ZAL Port website. Even though this website preserves its traditional look, it is now more intuitive and practical thanks to the recent reorganization of its content. It includes a complete section containing all the latest news and also a transparency portal.

It should be also noted that the connectivity the ZAL Port has accomplished is considered a European model. The new metro line, the proximity of the airport, the railway and especially the port are key elements for any logistics area and the ZAL Port has all of them. For this reason, the orange circle is so important for its image and has been chosen as a common element in all the other associated logos, of the Service Center, Petro ZAL Port and ECO ZAL Port.

Closer to the Barcelona Port

The nearly 42 million Euros invoiced in 2015, the best results in the history of the ZAL Port, along with the debt refinancing agreement with the EIB have marked a before and after in the history of the ZAL Port. It has allowed it to come out of the downturn in which it found itself from 2008, to acquire land, build, invest and grow, always with the aim of helping in the Port in its strategic plan to become the leader in the South of Europe. Therefore, the ZAL Port now has the ability to reach a million sqm in logistic infrastructure, which would make it the largest park in Spain.

The proximity to the Port is also reflected in the new image, not only by the name that now includes “Port” but also in the emblematic wave present in all forms of the graphic logo and the characteristic blue that will be seen in every detail and element of the ZAL Port.