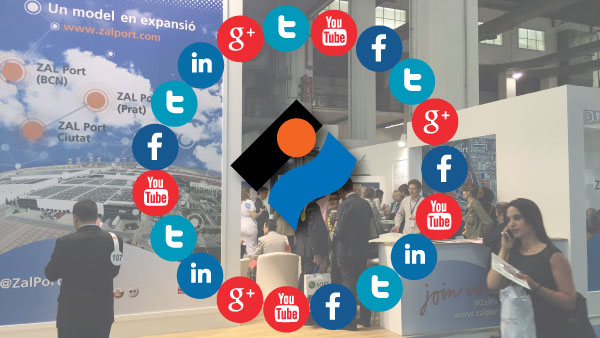 The ZAL Port has been present in the Barcelona fair, the Salón Internacional de la Logística y la Manutención(SIL) (International Logistics and Material Handling Exhibition) since its beginning. In collaboration with the Port of Barcelona, the logistics platform has one of the main stands in which they organize activities and symposiums. Without a doubt, the ZAL Port will make a mark on the most important fair of the sector in the state.

The SIL Exhibition is a must for any company in this activity sector but the ZAL Port wants to go further and to place itself in another area which is representative of today’s society, that of the social networks. If anything characterizes the Logistics Activities Zone (ZAL) of the Port of Barcelona it is its willingness to cross frontiers, to be a pioneer and listen to those in its surrounding area. And what better way to stay in touch with their community than use Facebook where they find many Simphonie users, parents of children at the nursery school in ZAL Port.

On Twitter, for example, the park is a spokesperson for the Port of Barcelona with whom they follow the same path in order to become European models. It also acts as a spokesperson for its customers and for the foundations and associations with whom it collaborates, for example the Collection drives for the Banc dels Aliments (Food Bank). Also present on LinkedIn, Google + and Youtube, ZAL Port looks for the appropriate online channel for each audience and subject matter, customising the dissemination of information to the sector.

This year we presented ZAL Port as a model and leader in expansion with the acquisition of new plots that make up a new map: ZAL Port (BCN) the first phase of the platform with 69 hectares, ZAL Port (Prat) with its expansion in the municipality of El Prat de Llobregat with 143 hectares and ZAL Port-Ciutat, reffering to the new 27 hectares granted for 75 years in the CZFB area.

We also had the opportunity to present the new ZAL Port APP, which you can download from any smartphone and that helps the user to find the companies that are located in the ZAL Port platform from the search engine in Google maps, tracing the route from the point of origin to the destination and also supplying all the necessary information to contact the company.

Arousing interest in all areas

If ZAL Port has become a role model at an international level it is due to this transversal spirit to offer the best and make the most of what it has available. Its geographical connection with key points such as the Port or El Prat airport in Barcelona, the quality of its facilities, its environmental policies, the social support or its labour agreements are some of the reasons that maintains over 98% of employment of their warehouses.

This is why it arouses interest among most influential leaders. The new shareholder, MERLIN Properties which has been the first SOCIMI (Real Estate Investment Trust) listed on the Ibex 35 and the largest in the real estate sector in Spain, clients such as Carrefour, which having established itself in ZAL Port has decided to expand its presence with a second warehouse, or coming back to the SIL, this logistic development stand becomes the background of the photograph of the official opening.

In 2017 ZAL Port will return to the SIL Exhibition but in the meantime, it will continue making its path in the online world, organising onsite symposiums in the “ZAL Forum” and, of course, with its activity in the sector.