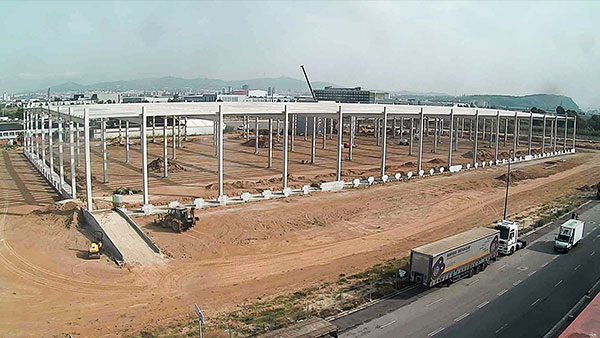 In 2015, the ZAL Port, managed by CILSA, had such good results that it is clear that the Port of Barcelona Park is ready to begin a new expansion phase. The decision of Carrefour, based in ZAL Port (Prat) since 2009, to build an additional warehouse destined entirely to their cold product operation is proof that this new phase has already arrived.

The new Carrefour warehouse will cover 18,200 sqm, enjoy state of the art developments in cold storage technology and, in accordance with the policies of Social Responsibility of the ZAL Port, will have energy efficient facilities that will decrease the impact on the environment as a result of their logistic activity. It will also have a mechanized system that will improve the productivity of the international company.

The warehouse is a huge project for the ZAL Port and Carrefour which once again demonstrates how technology and innovation can bring value to the supply chain. 12 million Euros will be invested by CILSA, the company that manages the ZAL Port and who already has awarded the project to UTE Plot 35 ZAL Prat, a temporary joint venture of the companies Urcotex Inmobiliaria and Isidro Archs and Agefred.

But the expansion of the ZAL Port goes beyond this. The two plots acquired by the Consorci that now form the new ZAL Port-Ciutat have allowed them to expand the Park’s developable land up to 350,000 sqm of logistic land. The first 18,000 will be assigned to Carrefour but by the end of 2017 a total of 50,000 sqm of warehouses will be built.

Among the projects planned to be built is a warehouse for an ecommerce client and others that have not yet been sold but that represent a reasonable risk, as according to the words of the director of CILSA, Alfonso Martínez “they will definitely be rented.” The ZAL Port wants to continue developing their land with the aim of becoming one of the best logistics parks of Southern Europe and they have already started along this path with the Carrefour warehouse.