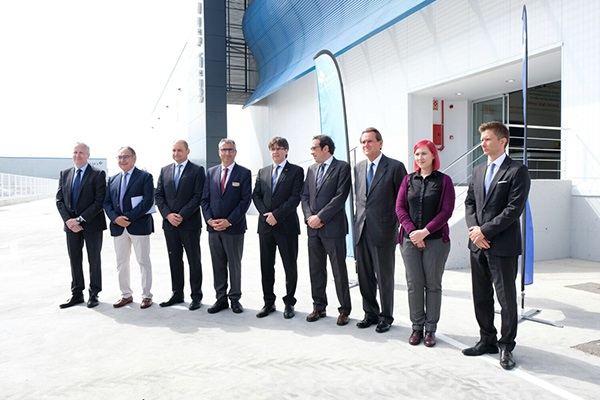 The inauguration of the new platform of Carrefour in the ZAL Port (Prat) cold on 22 may, attended by (i) participation of the President of the Generalitat de Catalunya, Carles Puigdemont , the Minister of the Territori i Sostenibilitat, Josep Rull, and the President of Puertos del Estado, José Llorca.

In addition to the authorities, there are the 130 guests and representatives of the ZAL Port, the Port of Barcelona, the Town Hall of el Prat de Llobregat, and Carrefour. Attendees enjoyed a guided tour of the facilities of more than 18,200 sqm that would be closed with a networking- breakfast after the parliaments of the President Carles Puigdemont, the President of the Port of Barcelona, Sixte Cambra, the President of Puertos del Estado, José Llorca and Adviser and General Manager of Carrefour Spain, Pascal Clouzard.

During his speech at the new facility, the President Carles Puigdemont expressed our pride that Carrefour carried more than 40 years now betting on Catalonia.

They are 4 decades of growth in our country and, since 2009; one of pillars has been its logistics platform in the ZAL Port. One of the of greatest dimension in the Logistics Activities Zone of the Port of Barcelona with 45,000 sqm and which now are the perfect complement to the new cold platform.

Clouzard, in his speech, took the opportunity to remind how new technologies add value to the supply chain, referring to the high equipment that has the new warehouse. In this sense, Alfonso Martínez, General Manager of the ZAL Port, added upon receipt, that “by its specialization and great technological development” the warehouse is a challenge rather than strengthens the ZAL Port as the center of reference in the South of Europe.

The loyalty shown by Carrefour to the ZAL Port is one more example of the high level of customer’s satisfaction. It should be remember that also the high occupation that nearly 100% of the facilities of the logistics platform and the renewal of contracts such as Noatum Logistics with the expansion of a warehouse in the ZAL Port (Prat) of 4,850 sqm, renovation and expansion of surface of CMA CGM Iberica in the Service Center of the ZAL Port  and the renewal of confidence and reform facilities of Globelink Uniexco.